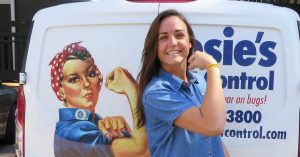 Rosie’s Pest Control was founded on the idea of using primarily female spray technicians.  Rosie the Riveter was the perfect symbol of the capable and confident woman so Rosie’s was born!

Rosie the Riveter is a cultural icon of World War II, representing the women who worked in factories and shipyards during World War II, many of whom produced munitions and war supplies. These women sometimes took entirely new jobs replacing the male workers who joined the military. Rosie the Riveter is used as a symbol of feminism and women’s economic power. Similar images of women war workers appeared in other countries such as Britain and Australia. Images of women workers were widespread in the media as government posters, and commercial advertising was heavily used by the government to encourage women to volunteer for wartime service in factories.

Katie Fox, our version of Rosie, works hard every day to make sure your homes and businesses are free from pests of all kinds. Rodents, spiders, termites, roaches, ants and all of manner of pests are no match for our environmentally friendly treatments. Our treatments are pet friendly as well. We believe that the female spray technician has great attention to detail and makes residents feel comfortable.  If you would like to give Rosie’s a try and live in the Memphis area, call 901-567-3800. We would love to show you how strong and capable our ‘Rosie’ is!